The School Chaplains’ Association was founded in 1976 by Fr. Seán Ó Longaigh, a Priest of the Diocese of Limerick.

The first meeting of the Association took place on Saturday, 10th April 1976 at the Marianella Centre, Rathgar in Dublin. Initially the membership of the Association consisted solely of Chaplains from Community and Comprehensive Schools as these were the only schools with full time Chaplains. The association went into abeyance in the mid-1980s.

In the 1990’s there was a revival of the School Chaplains’ Association. We have recorded minutes of Executive meetings from this time on. The annual National Conference took place in Gort Mhuire in Dublin for many years in November. This received Department of Education approval as official in-service for Chaplains.

One of the main priorities for the Chaplains’ Executive during these years was the issue of contracts. This became a greater priority following the appointment of lay Chaplains from 1992 onwards. Hand in hand with the Executives discussions with the Episcopal Conferences re contracts, was the need to define the role of the Chaplain and the duties attached. Evidence of communication to school managements has also been kept on file, outlining guidelines and agreed duties a Chaplain is expected to fulfill in schools including maximum teaching hours.

One can see that this attempt to formalise the role led to a more professional understanding of chaplaincy. Courses training new Chaplains became available as a result and the SCA were invited to nominate two representatives to the Programme Board for the Graduate Diploma/MA in School Chaplaincy & Pastoral Care in Mater Dei in the year 2000.

Our records also show that from a few clusters covering huge geographical areas in the early 90’s, many more regional groups sprung up over the years at a more local level, offering Chaplains more accessible and invaluable peer support.

And so, it is clear from our records of the work carried out on behalf of School Chaplains across the country throughout the 90’s and onwards, that great credit and appreciation is due to those who worked on our behalf.

The Association has continued to evolve, and go from strength to strength, addressing relevant needs as they arise, but looking back over the records of the Association, a firm foundation was laid, and we are indebted to those executive members over the years who voluntarily committed to keep the torch lighting with strength & warmth. 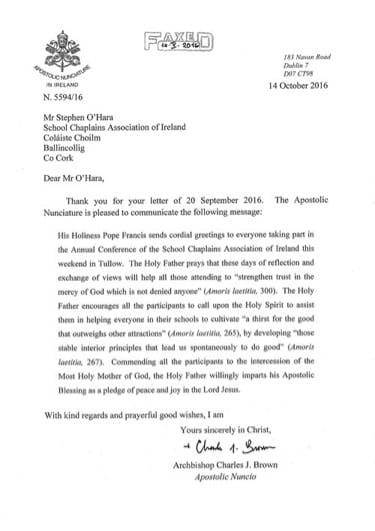 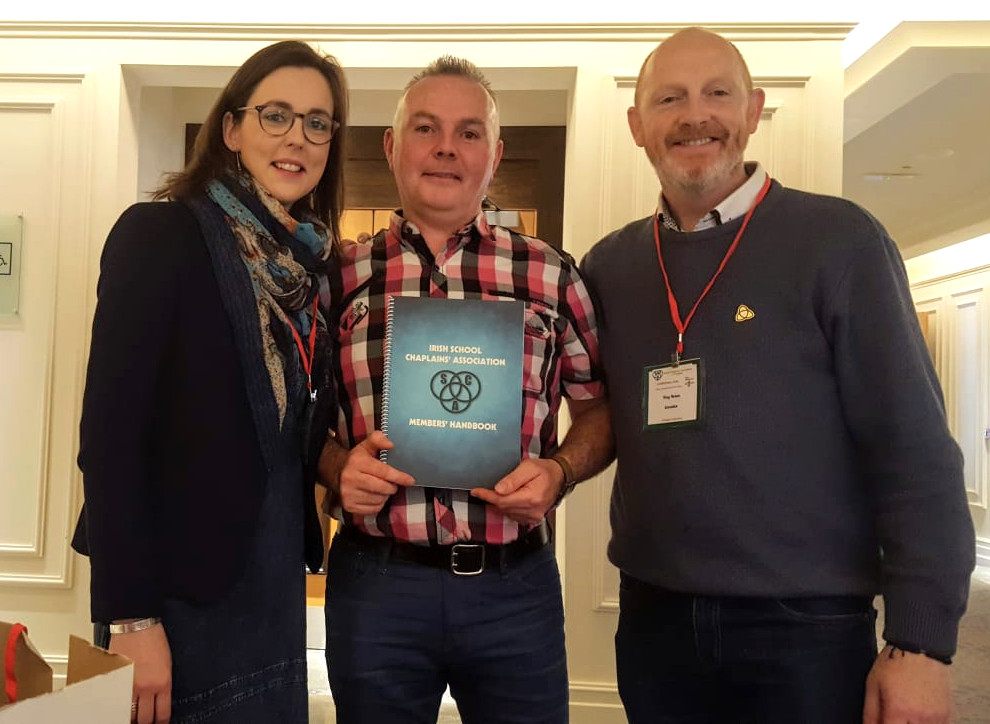 This site uses cookies. By continuing to browse the site, you are agreeing to our use of cookies.

We use necessary cookies to make our site work. We'd also like to set optional analytics cookies to help us improve it. We won't set optional cookies unless you enable them. Using this tool will set a cookie on your device to remember your preferences.

Necessary cookies enable core functionality such as security, network management, and accessibility. You may disable these by changing your browser settings, but this may affect how the website functions.

Google Analytics Cookies
We'd like to set Google Analytics cookies to help us to improve our website by collecting and reporting information on how you use it. The cookies collect information in a way that does not directly identify anyone.
Other external services

We also use different external services like Google Webfonts, Google Maps and external Video providers. Since these providers may collect personal data like your IP address we allow you to block them here. Please be aware that this might heavily reduce the functionality and appearance of our site. Changes will take effect once you reload the page.